Dearing was born in 1865, a tough time to be a child of the new South. He was orphaned and kidnapped. Family lore has it that as a child he was once traded for a shotgun and another time for a ham.

Casting aside the obstacles, Dearing became a businessman, was elected circuit clerk of Independence County and in 1911 served as sergeant-at-arms of the Arkansas Senate.

Shipman, to his knowledge, has never been traded for a shotgun. Or a ham. Nor has he held elective office, electing instead for a long career as a telephone technician.

But he has taken on a task that links him directly to his grandfather, whom he never knew and who died in 1938.

Shipman owns, lives in, and has worked since his 2012 retirement to restore T.H. Dearing’s house, sited on five acres on a high spot in Newark. It’s 745 N. Locust Place for those who want to drive by and read the historical marker placed there in 1977, the year the house was added to the National Register of Historic Places. (Arkansas has about 2,600 such places.) 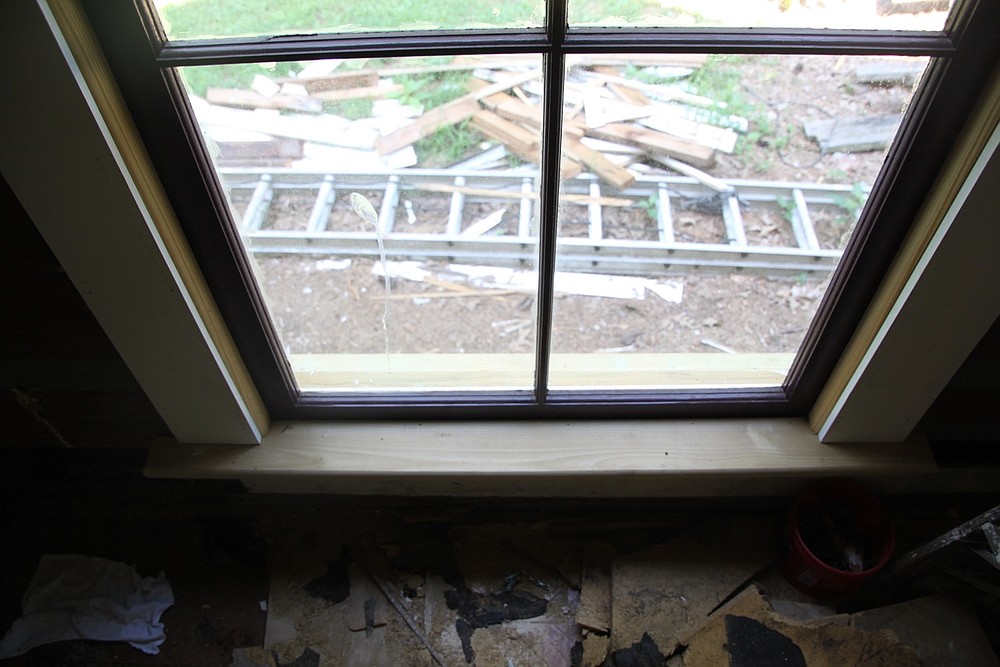 Windows aren’t just glass. They’re sashes and frames and sills. In Terry Shipman’s house, the rebuilding or replacement of a of a window takes time and care. Some of the replaced windows were aluminum, and not exactly compatible with the home’s 19th Century construction.

The marker, some the worse for 45 years of weather, says the house has been in the Dearing-Shipman family since its construction, and at the time was the property of T.H. Dearing’s daughter, Lena Shipman, and her husband, E.E. Shipman.

Forty-five years? An eye blink. This house was built in nearby Akron in about 1890, and moved to this site in 1901, a process that further family lore says resulted in leftover building materials that would fill no more than a wheelbarrow.

Lena and E.E. were Terry Shipman’s parents. His plan is to continue family ownership through his three stepchildren.

But that’s down the road. Casting his eyes on the roof, Shipman recalled that he fixed that roof over four years, from his ages 56 to 60.

“The next time it needs a roof I’ll be near 90 and won’t be getting up on the roof anymore,” he said.

That’s optimism. The flip side of which is pragmatism: 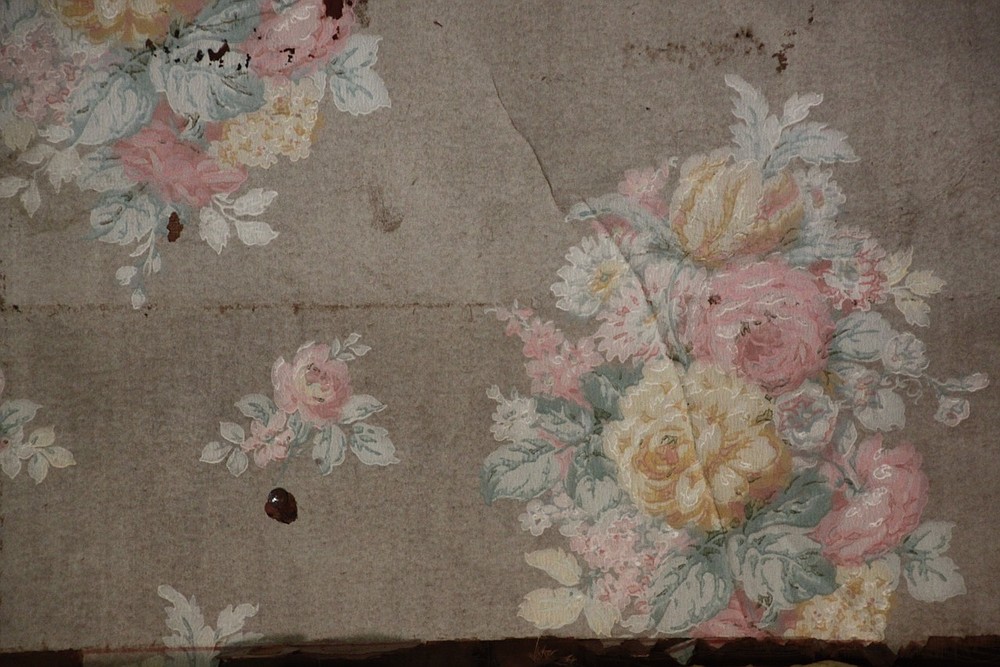 Ornate floral wallpaper was popular in the early 20th Century. This is a detail shot of the remnants of a border in Terry Shipman’s home, older than a century, in Newark in Independence County.

Newark is 12 miles from Batesville, the Independence County seat, and 15 miles from Newport, the Jackson County seat. 2010 Census figures put the city’s population at about 1,200. The downtown, the block-long Front Street, is mostly empty. There’s a cabinet shop and City Hall, which used to be a Bank of America branch.

Rising out of the nearby flatlands is the Independence Power Plant, a coal-fired plant whose two units came online in 1983 and 1984. Entergy said this year that it plans to close the plant by 2030.

About two miles from the Dearing house is the Akron Cemetery, also on the National Register of Historic Places. Its first interment, according to the Arkansas Department of Heritage, was in 1829.

In its nomination document, the department noted the cemetery is mere yards from the White River and is frequently flooded. Leaves of ancient trees rustled in the breeze of a hot June day as Terry Shipman pointed out the nearness of the river that ended Akron.

That’s why the Dearing House was moved to Newark. That plus a population shift in the late 19th century from river towns to railroad towns.

The nomination document notes that many Akron residents moved uphill to Newark, and adds this: “The handsome Dearing House was constructed in Akron about 1890, and bought early on by T.H. Dearing. In 1901 he dismantled the one-story house, reconstructed it in Newark, and added the second story in 1913.”

This newspaper first visited Shipman seven years ago. A second visit was designed to answer the question: How goes the restoration? 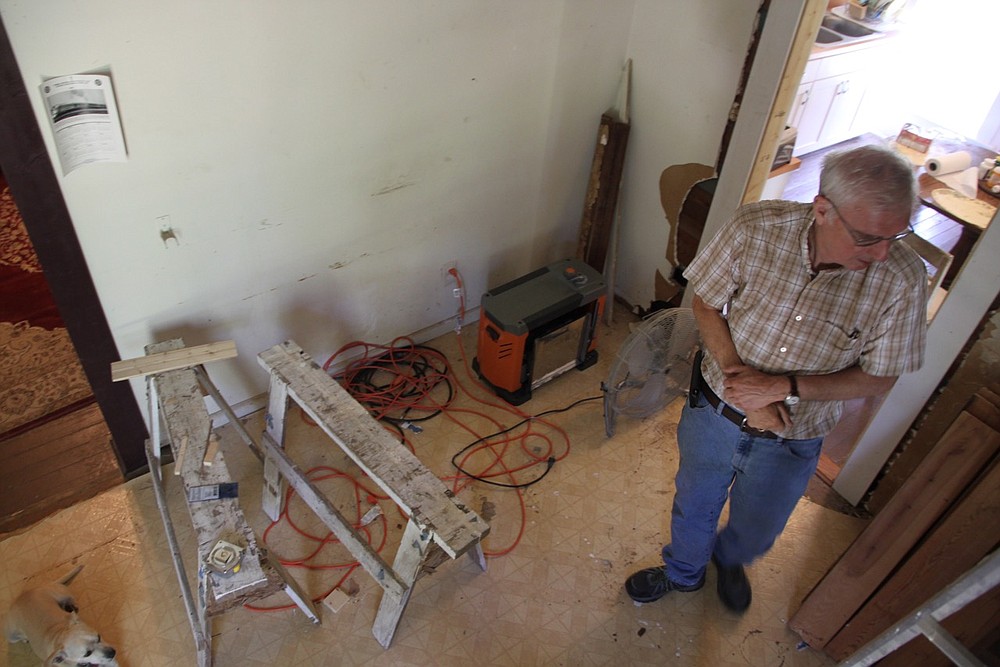 Much of Shipman’s house is in a state of repair and rehabilitation. He also has a collection of tools not seen in an ordinary garage. The black and orange device in the corner is a wood planer, handy for salvaging boards and planks for further use.

It goes and goes. But much remains.

Shipman sat in his easy chair and explained the progress. His small dog, Sandy, was on his lap. Sandy showed up on the porch one freezing winter day. Shipman wouldn’t leave him out there to die. Freezing to death on this day wasn’t a problem. The house has neither central heat nor air.

“It never gets that uncomfortable for me unless it gets over 100,” Shipman said. He does have a window air-conditioning unit in his bedroom. He has space heaters, “but February was terrible. They couldn’t keep up. I was sitting in my chair and could see my breath.”

He ticks off what’s been accomplished.

This room, once a bedroom and now a family room — most of the rooms, he said, have played musical chairs — has been restored, with raised ceilings, new panel doors and reproduction transoms. A transom is a window over a door that lets in light and, when opened, allows air to flow.

Raising a ceiling requires sheetrock. And a sheetrock jack, one of the many tools Shipman has acquired. He also has a planer, useful for salvaging wood.

The original kitchen is, once again, a kitchen. The original 12-foot ceilings have been restored, as has the floor. The pantry, chock full of tools and not food, has a plaque over it: “Mrs. T.H. Dearing’s 1901 kitchen. Rebuilt 2020.” 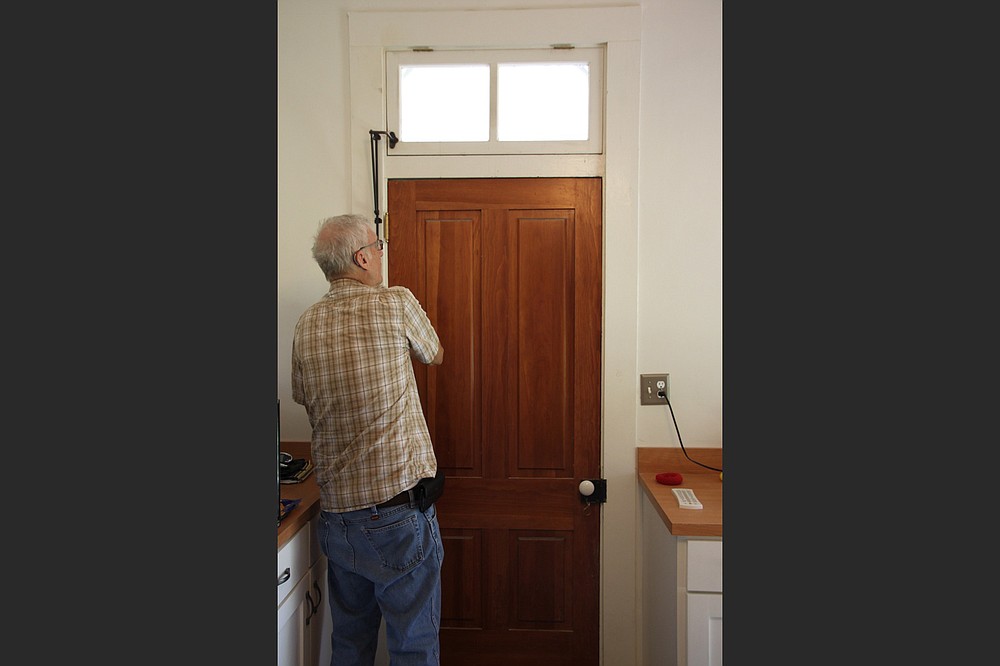 An important part of the fixing up of the kitchen in the Dearing house was installation of transoms, windows above doors which let in light and when opened provide air flow. The latter in especially important in a house without central heating or air conditioning.

The porches have been rebuilt completely. This required a contractor, but also a lot of work on Shipman’s part. He used a scroll saw to carve out umpteen gingerbread balustrades. A swing graces one of the porches. Along with a pile of building materials for the never-ending projects to come.

Rebuilding the porches was a big thing, Shipman said, and quipped: “I no longer have an AT&T company savings plan.”

Back in the kitchen, the brick flue has been replaced. Over in Batesville, at the Tractor Supply Co. store, Shipman saw for $300 a cast-iron stove identical to the one his grandmother, Fleetie Dearing, used for 40 years. It would only be decorative — the flue would be unsafe for a wood-burning stove, Shipman said.

He has painted the exterior, another never-ending job. “It’s clapboard, 100 years old, and doesn’t hold the paint.” He estimates that over the past 50 years the exterior has been painted 10 to 15 times.

The house is a history of change in Newark, which got electricity in the 1930s, city water in 1958, and sewer service in 1969, Shipman said. The house’s first bathroom was installed in June 1968.

So what percent of the projects have been done? Shipman estimates 50% to 60%. 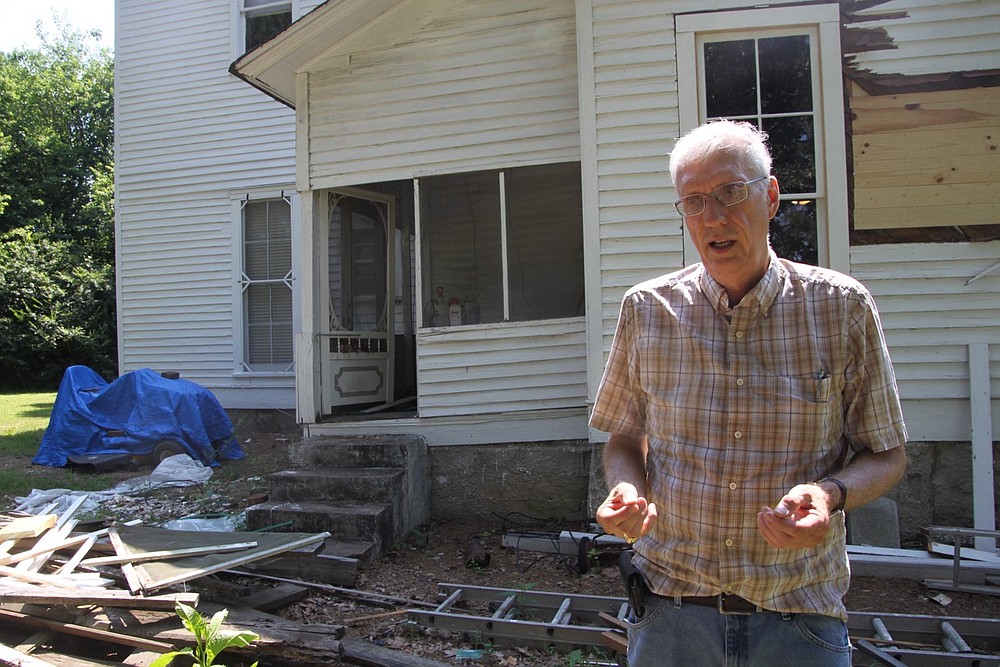 Terry Shipman explains some of the tasks involved in rehabilitating, as best as he can, the Dearing house in Newark owned by his grandfather, T.H. Dearing, in 1890. A second story was later added. Shipman, a retired telephone technician, has done much of the work himself since his retirement in 2012.

One hundred miles away, at Curran Hall on East Capitol Avenue in Little Rock, Patricia Blick understands Terry Shipman’s challenge. She’s executive director of the Quapaw Quarter Association and has been in the business of historic preservation for more than 20 years. She’s worked in Arkansas, Virginia and Maryland, in Annapolis where she was involved in the rehabilitation of a Colonial-era warehouse.

She has perspective on what it takes to save an old, old place. Pay attention, would-be restorers.

It helps to have a plan and a list of priorities. “That can keep you from making a mistake that can be time-consuming and costly.” Some of the most important work will be some of the most mundane. Heating and cooling, for instance. The roof. The electrical system.

It helps to know the difference between rehabilitation and restoration.

In the former, a modern use is found for a historical building. In the latter, a higher level of commitment, the building is “taken back to a very specific time, when it was constructed.”

To better explain rehabilitation, she offered a visit to the Woodruff House on East Eighth Street in Little Rock. It was built in 1852-53 by William Woodruff, founder of the Arkansas Gazette. It’s a beauty, with four massive front-porch columns, three stories and 7,000 square feet.

The Quapaw Quarter Association owns the house. Blick admits to being “semi-complicit” in its purchase — at the time she was assistant director of the Arkansas Historic Preservation Program. The house can be bought for a mere $300,000. Once sectioned into 14 apartments, its best use is likely as an office building, she said. 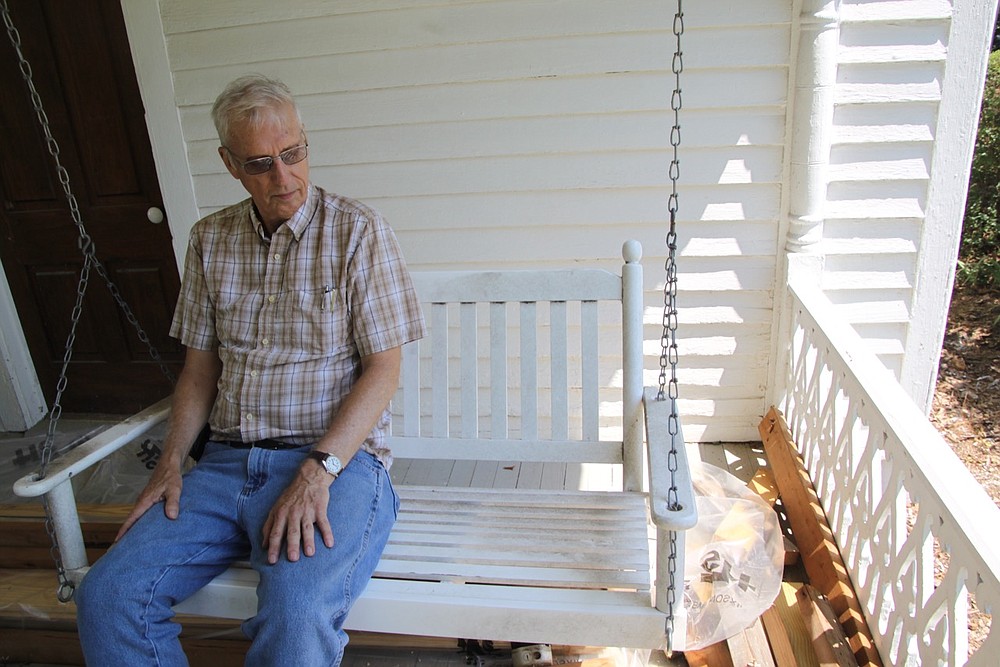 A swing is a pleasant thing to have on a porch. Realizing he didn’t have the ability to fix the house’s three porches, Shipman called in a contractor. Because the work on the house never ends, a porch is also a good place to store building materials.

Don’t be fooled by that low, low price. Making the Woodruff House into office space would take $300 to $400 a square foot, Blick said. Figure $2.1 million to $2.8 million. On the happy side, a state tax credit of 20% of the restoration cost is available. “That’s nothing to sneeze at,” Blick said.

Shipman also has something to say about the commitment made to fixing up an old, old place.

“If I was wealthy I would hire a contractor who specializes in restoration. But I have to do as much as I can myself,” he said.

Doing it himself means electrical work. Hiring out means plumbing. Know when a job is too big to handle by yourself, he said. The internet has resources, such as a YouTube video that showed him how to miter obtuse angles for baseboards and quarter rounds.

Go into a house with eyes wide open, he said, because it can become a money pit.

Blick cautions against television programs that fix up a house in an hour. “They’ve warped our sense of construction projects,” in terms of time and cost.

After almost a decade of work, Terry Shipman’s eyes remain wide open, and the goal remains the same.

“I want to restore the house as closely as possible to what it was when I was a little boy.”