Pinnacle Plumbing: Find a Manufacturer You Can Rely On

SMITHFIELD, RI — If you ask Allen Pacheco, Owner/Operator of Pinnacle Plumbing & Heating how business is going he’ll tell you that he’s got plenty of work, but right now things are complicated. He’s having difficulty making his clients understand just how the post-pandemic marketplace is functioning.

“It’s very busy,” Pacheco says, “with some very unrealistic expectations. I think everybody is starting to see that.”

In just the past three months, Pinnacle has seen problems with availability of supplies and products, and with cost increases that he calls, frankly, astronomical. “So it’s been a job of managing expectations,” Pacheco says. “Someone calls and wants to do a project, and no—you have to tell them no, you’re not going to see the product that you need for a month. That’s been the biggest challenge right now.” One of the I-Series units installed.Pinnacle HeatingPacheco’s other challenge has been finding qualified help. Luckily, he has as very solid crew at the core of his business, people who have been with him for five years, eight years, some of them even from the start of his business way back in 2008. “We’ve been very fortunate,” he says, “They’ve been fantastic.”

Pinnacle Plumbing & Heating is headquartered in Smithfield, Rhode Island, and currently employs 22 technicians. The company operates mostly in Rhode Island state and specializes in high-end residential/commercial work. They do a lot of multi-family jobs, including both condominiums and low-income housing.

Right now the company has multiple projects running. One, in Newport, is more than 70 units, all with hydronic heating. “It’s all new construction,” Pacheco says. “Throughout the course of it so far we’ve averaged about six guys on it. They want us out of there by July—I don’t know if that’s actually going to happen, but that’s what we’re going for.” Right now, Pinnacle has completed work on 60 units, with 30 of them already occupied. So far, the residents are pleased with their systems’ performance.

Another project, in Providence, involves 42 units. Both jobs are tied to the Rhode Island Housing Authority, and both jobs are being completed using I-Series Combi Boilers from Rinnai powering Sterling, pre-manufactured hydronic baseboard.

The I-Series is ideal for multi-unit installations. The compact, wall-mounted design helps save on space. The units can deliver whole-house heating as well as domestic hot water. The stainless steel, self-cleaning heat exchanger delivers long operating life with low maintenance. The boilers are Energy Star-rated and offered in a number of different models with capacities to suit a wide variety of applications.

But for Pacheco, who has to install the units, the reliability of the product goes hand-in-hand with the reliability of the company that sells it. “We’ve dealt with Rinnai directly,” Pacheco explains, “and seeing how they’ve responded to the issues we had really sold us on them. If you made a comment about how something could be done better, they did it. They listened to what technicians on the ground were telling them.” 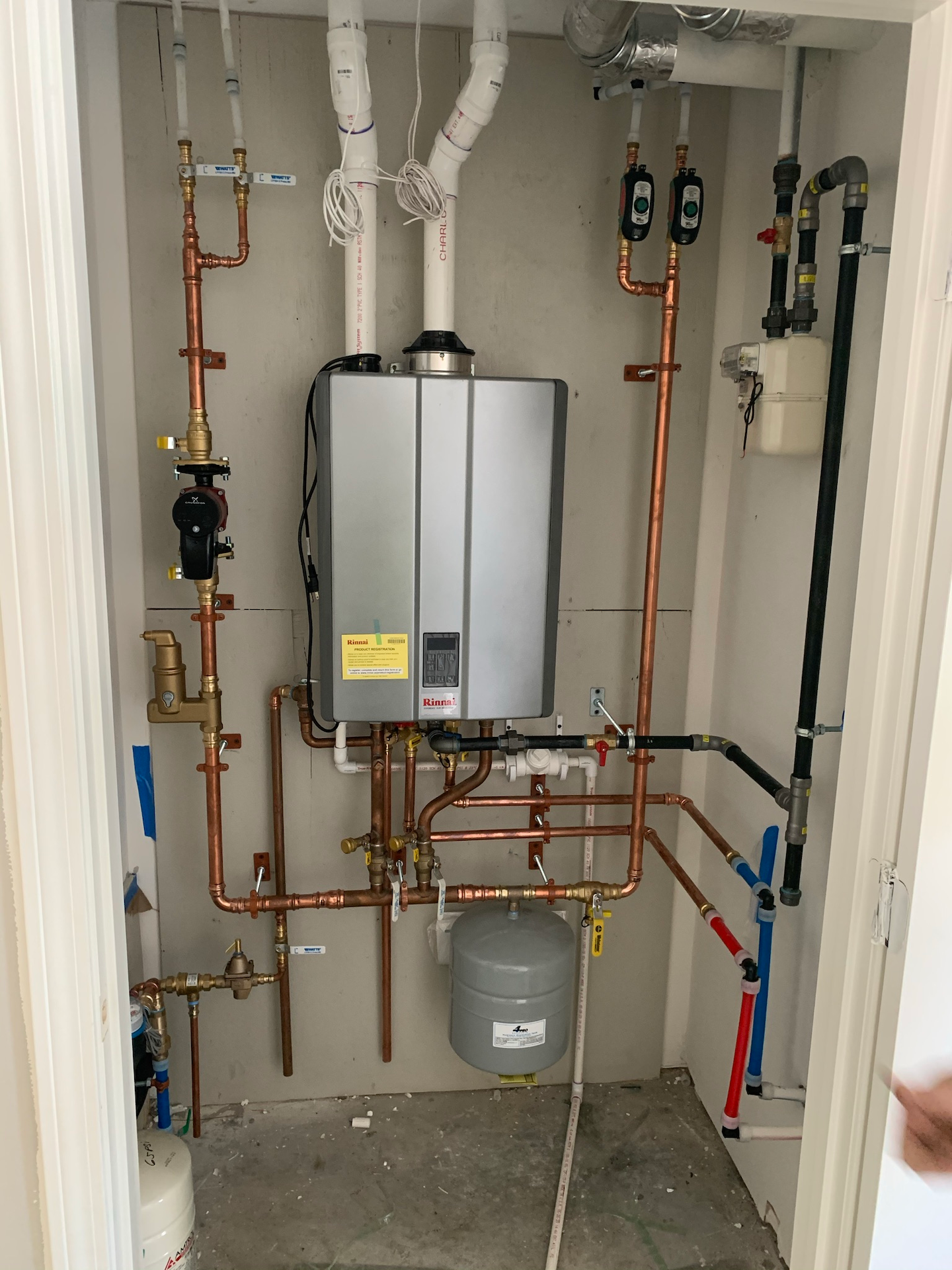 Another of the I-Series units plumbed in a similar configuration with different piping.Pinnacle PlumbingKey to that has been Rinnai’s 24-7 availability. If there was ever a question or a technical complication that wasn’t addressed in the manual, Pacheco knew he could just pick up the phone. “We can say hey, we ran into this [issue],” he says, “we might be an extra three feet too long… what can we do to get around this? Fix this? And usually the answers come back within a day.”

Sometimes that assistance is just advice to the Pinnacle’s technicians, but sometimes it consists of actual engineering changes to the I-Series units. Pacheco is quick to say that there haven’t been any technical problems with the units themselves and how they work, but there have been some tricky connections they’ve had to make. “And when the next shipment of boilers comes out,” Pacheco says, “that product or piece has already been identified and altered.”

It makes such a huge difference because Pacheco has seen the other side of the coin. Pinnacle worked with another manufacturer on previous projects and did not experience that same level of customer service. It led to issues that are still being resolved.

So when Pinnacle heating first came to the Newport job and found a different brand of boiler had been specified, Pacheco pushed back. “We weren’t comfortable with that,” Pacheco says. “We didn’t like some of the service issues that the company had had. So we presented [the Rinnai units] as a change, and said, hey, what do you guys think? This is what I bring to the table, this is how good of a company they are, and in the end they agreed.”

Pacheco brought the same arguments to the people specifying the Providence job and this time was met with even less resistance. “It was literally a two-second conversation,” he says.

In the midst of all the post-pandemic difficulties his company has had to deal with, having a manufacturer he can rely on has helped Pacheco’s peace of mind. “That’s probably been the most beneficial thing for us,” he says, “having that availability, having them stand behind us as technicians and installers, being able to say to them… if you could do it this just a little differently it would make a world of difference, and they jump right on it. They really follow through with what they say they’re going to do.”