The Southwest United States is known for civic and monumental designs. These projects establish iconic, contemporary expressions that move beyond vernacular traditions. Located on sites throughout Texas, New Mexico, and Arizona, they are designed with modern aesthetics and new ideas. Novel spatial experiences and formal approaches are being explored by both local and international architects. Standing in contrast to the intimate, discreet spaces found within southwest residential architecture, these buildings are prominent landmarks and nodes within their respective cities. 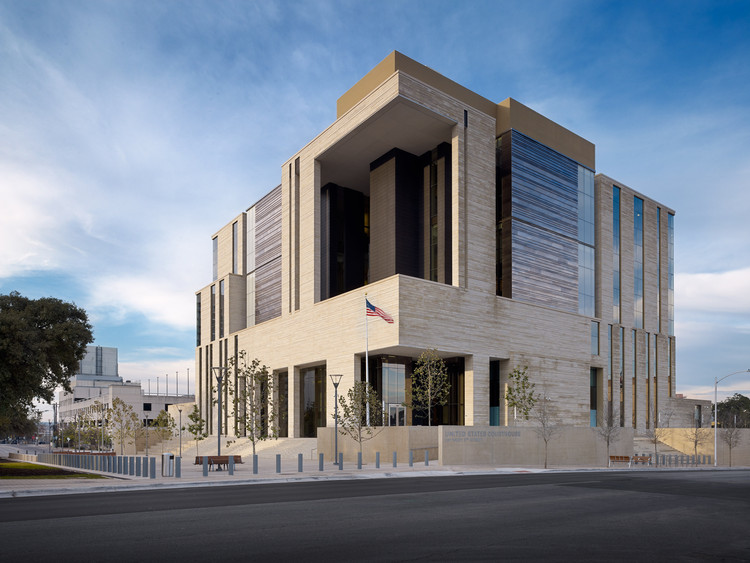 The following projects create hybrid programs and entirely new envelopes. They materialize inherent design values and those of each client. They all use distinct envelopes and screens to craft memorable exterior experiences, while interior designs usually stand in stark contrast to the outer shells. Carefully oriented to take advantage of environmental conditions and embrace views, the projects open to people and place. While the surrounding building stock or landscapes may mix many different styles, these designs look forward with new materials, spatial typologies and conceptual ideas.

This chapel is part of a 58-acre church campus in Phoenix, Arizona. Sited along the edge of a desert preserve, a series of inclined, landscaped planes are incised by a 600 foot-long processional walk, progressively revealing the orthogonal chapel as one gradually ascends the 28 vertical feet between the chapel mount and garden entrance. A deep set steel channel, the narrow garden walk engages the botanical planes; looming, rusted steel walls gradually diminish to waist height.

This courthouse project had numerous goals: safe, secure processing of mass immigration defendants; updating the American traditional courthouse; creation of an outdoor communal space, cohesive with the urban fabric of downtown Yuma; high performance and sustainability at low cost; design excellence within strict security mandates. The Courthouse’s grand design gesture is its canopy of photovoltaics, held up by a series of naturally weathering steel columns.

The Museum of Outdoor Arts Element House is a structural insulated panel (SIPS) modular building designed to operate independently of public utilities by integrating passive systems and on-site energy-generation. The house functions as a guest house and visitor center for Star Axis, a nearby land art project by the artist Charles Ross in New Mexico. The organization of the house is based on an expansive geometric system of growth, radiating and aggregating outward.

The Palo Verde Library and Maryvale Community Center is a multi-use facility that includes a large public library collection area, a 150-seat auditorium for recital, drama and public lectures, and a community center that includes a park, pool, basketball courts, running track, and gym. The design intention was to discover a way to maintain the existing recreational park all the while providing a building that energized the surrounding community.

Confluence Park is a living laboratory that allows visitors to gain a greater understanding of the ecotypes of the South Texas region and the function of the San Antonio River watershed. The idea of confluence is ingrained in every aspect— from big gestures like the landform of the park representing the convergence of ecotypes in the South Texas region, to the pavilion “petals” imitating the form of plants that are structured to funnel dew and rainwater to their roots, down to the scale of the paver patterns reminiscent of the flow and confluence of waterways.

Ruby City is a 14,000-square-foot contemporary art center, with 10,000- square feet of exhibition space, in San Antonio, TX, dedicated to providing a space for the city’s thriving creative community to experience works by both local and internationally acclaimed artists. Envisioned in 2007 by the late collector, philanthropist, and artist Linda Pace, Ruby City presents works from Pace’s own collection of more than 800 paintings, sculptures, installations, and video works.

The Courthouse is a seven story, 252,000 square foot structure designed to house one special proceedings courtroom, four district courtrooms, four magistrate courtrooms, jury assembly and joint-use facilities, as well as associated facilities. The Austin judiciary set the criteria for the defining feature of the courthouse: the introduction of natural light into and views out of the courtrooms, jury deliberation rooms, attorney/ witness conference rooms and all other public spaces.