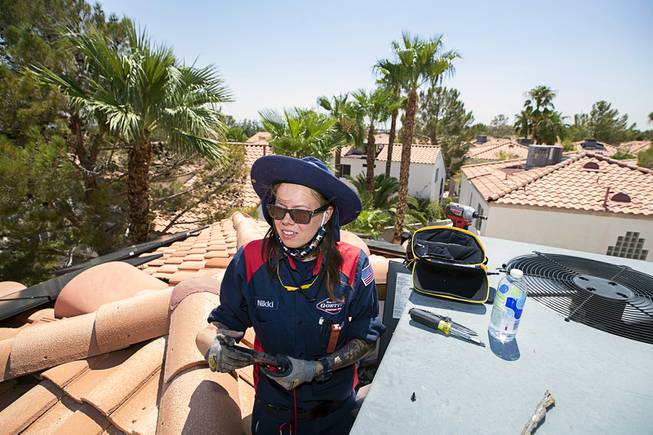 Nikki Kahalehili, a service technician with Goettl Air Conditioning and Plumbing, works on an air conditioner on the roof of a two-story home during a service call Thursday Aug. 5, 2021.

Nikki Kahalehili’s outstretched, tattooed arm gripped the gray aluminum extension ladder as she wiggled her way into the backyard of a two-story house in northwest Las Vegas.

It was the second service call for the Goettl Air Conditioning and Plumbing technician on this early August morning when the temperatures reached triple digits by mid-morning.

In the summertime, the 29-year-old puts in between 60 and 80 hours in her six-day work week because the consequences of inhabiting a home with a broken air conditioner unit range from discomforting to deadly.

Inadequate air conditioning is a risk factor for a heat stroke, according to the Mayo Clinic, which notes, “fans may make you feel better, but during sustained hot weather, air conditioning is the most effective way to cool down and lower humidity.”

Similarly, the Centers for Disease Control and Prevention says that “exposure to air conditioning for even a few hours a day will reduce the risk for heat-related illness” when temperatures reach the high 90s.

Despite the sweltering, long, strenuous hours that can keep Kahalehili from her loved ones, particularly during this season, she described her career as fulfilling. After all, she’s helping Las Vegas families get reprieve from the dangerous heat — the area has been under an excessive heat warning multiple times this summer, including in mid-July when temperatures reached a record 117 degrees.

On average, Goettl’s roughly 70 technicians have been responding to 85 daily calls in Southern Nevada, compared with about 50 calls during the winter months, company spokeswoman Hannah Sunderman said.

That includes Charles Walley, a new homeowner who called the company for a maintenance check — those preventive measures are vital to keep units working at full capacity, technicians said.

Technicians are qualified to provide maintenance, repair and replace air conditioning and heating units. They also check the thermostat and its wiring. Typically, the problem is “going to be in front of your face, you just have to find it,” Kahalehili said.

At her first appointment on this day, a routine maintenance call in south Las Vegas, Kahalehili shut off the unit, unscrewed the top panel and hooked up a diagnostics machine that’s synced up to a tablet, which showed her readings, and hosted photos of the unit. If she were to hit a snag, the tablet readers would allow a supervisor at headquarters to walk her through problems that arise, she said.

The company negotiates with customers who may be cash-strapped, which is pertinent during a global pandemic when so many people have been out of work and are now trying to get back on their feet, she said.

Sometimes, they are tough conversations to have, she said. “I try to help out customers as much as I can, obviously with the manager’s approval.”

For Sahara Air Conditioning and Cooling, high demand is yearlong, said Matt Lindsey, a representative with the company.

Sahara employs about half a dozen technicians, whose individual calls vary from six to eight a day, servicing air conditioners in the heat, and heaters in the cold. Their days begin at 7 a.m. and can go till 10 p.m., Lindsey said.

“Some work seven days a week,” he said. “There’s not very (much) downtime here in Vegas.”

Air Conditioning Contractors of America, a national trade group to which both Goettl and Sahara belong, doesn’t keep data on service calls. Some days, Kahalehili jokingly says, it’s easy to lose track of the high volume.

On slow summer days, Kahalehili said she is lucky to be home at 5:45 p.m. When it’s busy, such as the day before she checked Walley’s air conditioner, she didn’t get done until 10:30 p.m.

“Doing HVAC was a blessing in disguise because I really, really love it,” said Kahalehili, who after graduating from Liberty High School worked other jobs, such as in convention services and at a coffee shop. “I feel appreciated by the company I work for. They allow me a lot of responsibility.”

Sometimes in the field, she encounters retired, male HVAC technicians who are pleasantly surprised that the field has gotten more diverse. She is one of three female technicians Goettl employs in Las Vegas, Sunderman said.

It’s rewarding “for them to be excited to see me and encourage me when they don’t even know me,” Kahalehili said.