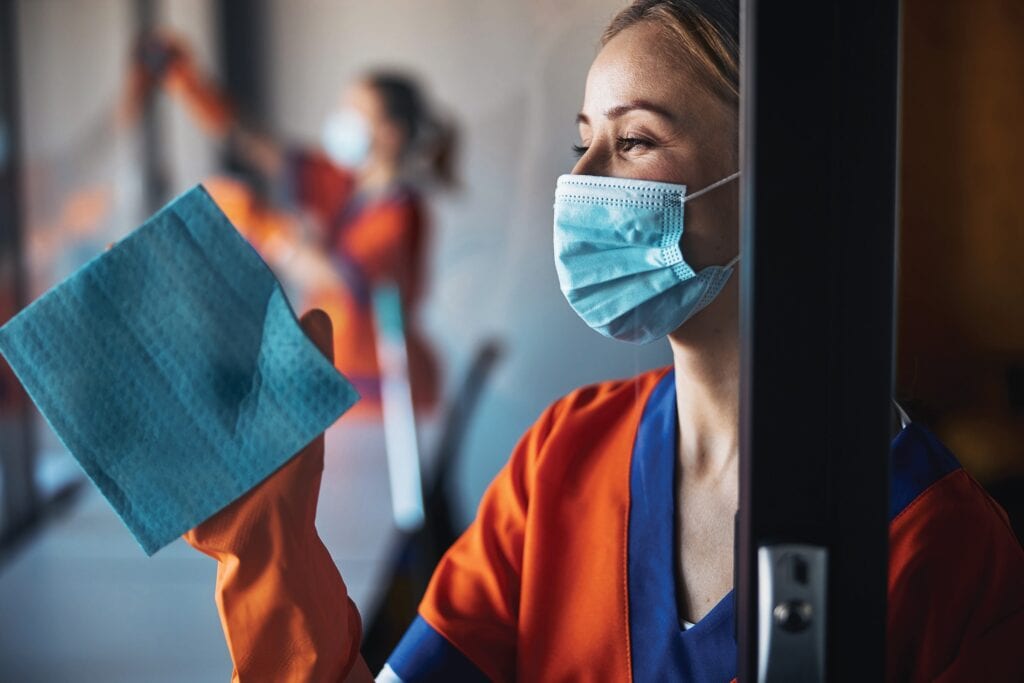 HIGHS AND LOWS—A janitorial service that cleans banks had plenty of work during the pandemic, while home-cleaning services had to cut back on staff. Maid in America owner Paul Lopez said that when Cal Lutheran University canceled its contract, “It really hurt. I can’t say for sure if we’ll ever get them back.”

As coronavirus outbreaks swelled last spring, legions of office workers were told to head home. Many of the low-wage custodial staffers who clean those offices were let go.

But not those at Thousand Oaks-based American Janitor Service.

“At the peak of the pandemic, we were doing quadruple the business,” owner Dorothy Clemen said.

“We used to go at night to clean,” Clemen said. “Now we go multiple times a day, mornings and afternoons, in addition to nights.”

She has had to hire more staff, and her workers are making overtime.

Not so for Paul Lopez and the Maid in America cleaning business he has run from Thousand Oaks for the past 33 years. He had been managing a full-time staff of eight, most of whom he has let go.

At his low point he was down to a few part-time employees. When his biggest client, Cal Lutheran University, called off in-person classes last spring, it canceled his contract.

“It really hurt,” Lopez said. “I can’t say for sure if we’ll ever get them back.”

The contrasting fortunes of two firms that perform essentially the same service—one thriving and the other surviving—is a reflection of the sometimes random, odd and often unfair way that the yearlong COVID-19 lockdown has chosen winners and losers.

Supermarket chains and de-services had banner years. Restaurants and entertainment venues struggled to stay in business.

Most of the gains were banked by those at the top of the pay scale. But as the fortunes of American Janitor Service illustrate, even some of those at the very bottom were able to make out well.

The unemployment rate in L.A. County hit 18.8% in May 2020. Low-income earners who could not switch to working remotely absorbed the biggest blow. Less than one in six Hispanic workers are able to work from home, according to recent U.S. Bureau of Labor Statistics; low-wage workers tend to have the least job flexibility.

For Hispanic workers, unemployment increased by 13.7 percentage points up to 18.9% from February to April 2020.

Lopez said his crew cleaned more than 30 homes per week before the pandemic but now clean fewer than 15.

“There’s a lot of paranoia about letting us into homes these days,” he said.

Premier Cleaning Services, another cleaning business in Thousand Oaks, has also struggled to remain afloat. Owner Tony Dye had to fire most of his employees because his residential clients were concerned about letting strangers in to clean their homes.

“We’re down about 50% during the pandemic,” said Dye, who has run his current business since 2018 but has been in the local cleaning industry for two decades. “People are just really nervous to have us in.”

Clemen, who founded American Janitor Service in 1990, had a different experience.

Banks comprise a significant portion of her client base. State regulations allowed banks to remain open throughout the pandemic, and the Centers for Disease Control and Prevention released stringent sanitation guidelines that banks had to abide by. These included use of special grade, COVID-specific disinfectants and increased frequency of cleaning.

She beefed up the staff, which is largely Hispanic, to 50 employees from 35. Clemen’s workers now regularly pick up as many as 12 hours of overtime per week, which brings in an extra $250.

Raul has been working at American Janitor since he lost his job as a busboy. (Clemen asked that her employees be identified by their first names only.)

“Now I work enough hours to exceed what I was making before COVID,” Raul said.

He, like most of Clemen’s workers, makes $14 per hour, a dollar more than California’s minimum wage.

“I was able to get this job sanitizing locations, and it’s given me enough to keep up with my bills during the pandemic,” said Romeldo, another AJS employee.

Employees who before the pandemic worked night shifts from 5 p.m. to 4 a.m. now volunteer to work extra between 9 a.m. and 4 p.m. too.

“I’ve been working nights for a number of years but not full-time,” Erica said. “Since March, I now also work during the day. The extra money has been very helpful to my family.”

“Previously I worked Uber Eats,” said Esteban, another employee. “The income was spotty. Now I’m working full-time during the day, and this has let me contribute more college tuition for my two children.”

Even with California back to business as usual, business owners like Lopez face an uncertain future if former clients don’t return.

“Before the pandemic, I had no plans of retiring anytime soon,” he said. “But if things don’t pick up, I’ll have to. I’ve taken a lot of hits this year, and I don’t know how many more I can take.”

Clemen, too, remains uncertain about what lies ahead, but for different reasons.

“It’s possible people will have gotten used to more cleanings,” Clemen said. “It’d be nice if things stayed a bit inflated for us even after the pandemic.”