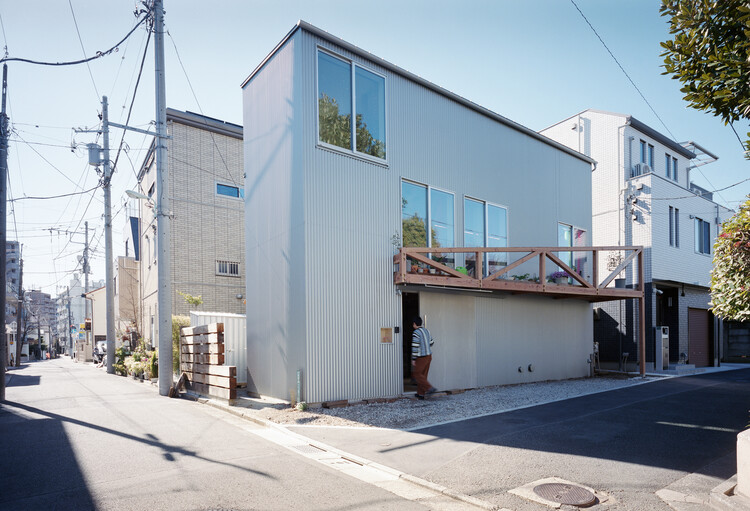 Text description provided by the architects. As you walk around the city you occasionally come across a ‘good house’, a place where you can feel that the land, structure and people are all united. Is it possible to actually design such a house where architecture and lifestyle can develop a sense of unity over time?

From our initial discussions on this project, we were surprised to be given the request of ‘a house like a warehouse with no windows.’ Ryo works as an engineer and makes music from home and Yuri is a stage designer who is often up late painting and crafting things. It was a house where work-life would play a big part and the idea of living in a warehouse was attractive as to the flexible, durable shelter it would provide for working freely at any time.

One of the fun things about living in a house like a warehouse is that you don’t need a front door. To be more precise, a front door is formed from a different set of conditions, defined by the scale and rhythm of moving goods in and out. So here the typical Japanese genkan is replaced by a sliding industrial door, which disrupts the usual relationship between private dwelling and the city outside. The ground floor can then be spatially closed off, forming a windowless workspace at street level. The 2F is opened up by large windows that spill out onto the terrace, linking the social space of the house with the street and the city outside.

Throughout the project we were consistently aiming for a design that was never finished, a responsive architecture where lifestyle and activity is at the foreground of space and structure. With this in mind we designed a structural system that would enliven the character of the space without overwhelming the compact interior. The ‘shaft frame with splints’ was born from a dialogue with structural engineer Atsushi Sato as a way to brace the structure against earthquakes, while retaining the crafted scale of the interior space.

The terrace, which was built as large as possible so that pot plants could accumulate like a stage for the street, was then repurposed as a support for the entrance awning. The top floor was originally just scaffolding but became a space through the ad hoc arrangement of excess timbers on site, overlaying the grid with an accumulated sense of constructed space.  The stair detail was improvised together with the carpenter on site, inspired by the tectonic of the structural splint system as it was being constructed.

In this way the designer, the builder and the owner stimulated each other’s craft spirit while working together to create an open process: an architecture of responses and additive rationalities. Each time we visit the house we come up with new ideas and continue our work: creating gardens, building benches and designing with time, so that the shape of life and the presence of architecture all continue to change within the flow of the everyday.