AC Feels Great, But It’s Terrible for the Planet

For the past few days, a heatwave has glowered over the Pacific Northwest, forcing temperatures in the region to a record-breaking 118ºF. Few people in the region—neither Americans nor Canadians—have air-conditioning. Stores sold out of new AC units in hours as a panicked public sought a reasonable solution to the emergency. Unfortunately, air-conditioning is part of what’s causing the unusual heatwave in the first place.

We came close to destroying all life on Earth during the Cold War, with the threat of nuclear annihilation. But we may have come even closer during the cooling war, when the rising number of Americans with air conditioners—and a refrigerant industry that fought regulation—nearly obliterated the ozone layer. We avoided that environmental catastrophe, but the fundamental problem of air conditioning has never really been resolved.

Mechanical cooling appeared in the early 1900s not for comfort but for business. In manufacturing, the regulation of temperature—“process cooling”—controlled the quality of commodities like cotton, tobacco, and chewing gum. In 1903, Alfred Wolff installed the first cooling system for people at the New York Stock Exchange because comfortable traders yielded considerably higher stock returns. Only in the ’20s did “commercial cooling” appear. On Memorial Day weekend 1925, Willis Carrier debuted the first centrifugal air-conditioning system at the Rivoli Theater in Midtown Manhattan. Previously, theaters had shut down in the summer. With air-conditioning, the Rivoli became “the talk of Broadway” and inaugurated the summer blockbuster. 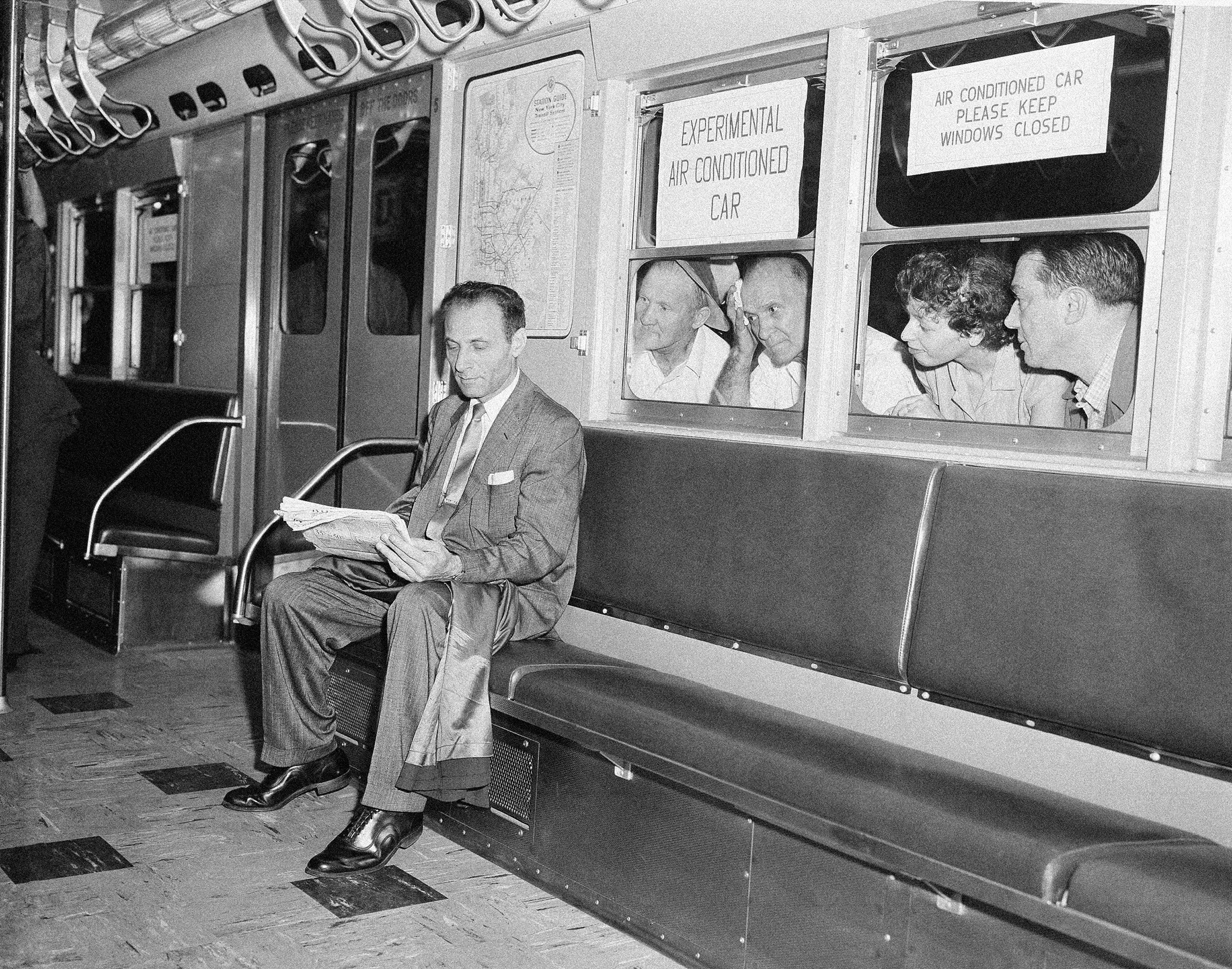 While other subway passengers perspire in the warm and humid underground station, Paul Forman appears cool and comfortable in the experimental air conditioned train, which made its first run in New York City, in July 1956. The test run included six air conditioned cars and two old cars. When the train left Grand Central Station, the temperature was 89 degrees in the old cars, while the new cars registered a temperature of 76.5 degrees.

Before World War II, almost no one had air-conditioning at home. Besides being financially impractical and culturally odd, it was also dangerous. Chemical refrigerants like sulfur dioxide and methyl chloride filled most fridges and coolers, and leaks could kill a child, poison a hospital floor, even blow up a basement. Everything changed with the invention of Freon in 1928. Non-toxic and non-explosive, Freon was hailed as a “miracle.” It made the modernist skyscraper—with its sealed windows and heat-absorbing materials—possible. It made living in the desert possible. The small, winter resort of Phoenix, Arizona, became a year-round attraction. Architecture could now ignore the local climate. Anywhere could be 65ºF with 55% humidity. Cheap materials made boxy, suburban tract housing affordable to most Americans, but the sealed-up, stifling design of these homes required air-conditioning to keep the heat at bay. Quickly, air-conditioning transitioned from a luxury to a necessity. By 1980, more than half of all U.S. homes were air-conditioned. And despite millions of Black Americans fleeing the violence of Jim Crow, the South saw greater in-migration than out-migration for the first time—a direct result of AC. The American car was similarly transformed. In 1955, only 10 percent of American cars had air-conditioning. Thirty years later, it came standard.

The cooling boom also altered the way we work. Now, Americans could work anywhere at any hour of the day. Early ads for air-conditioning promised not health or comfort but productivity. The workday could proceed no matter the season or the climate. Even in the home, A/C brought comfort as a means to rest up before the next work day.

The use of air-conditioning was as symbolic as it was material. It conveyed class status. Who did and didn’t have air-conditioning often fell starkly along the color line, too, especially in the South. It conquered the weather and, with it, the need to sweat or squirm or lie down in the summer swelter. In that sense, air-conditioning allowed Americans to transcend their physical bodies, that long-sought fantasy of the Puritan settlers: to be in the world but not of it. Miracle, indeed. 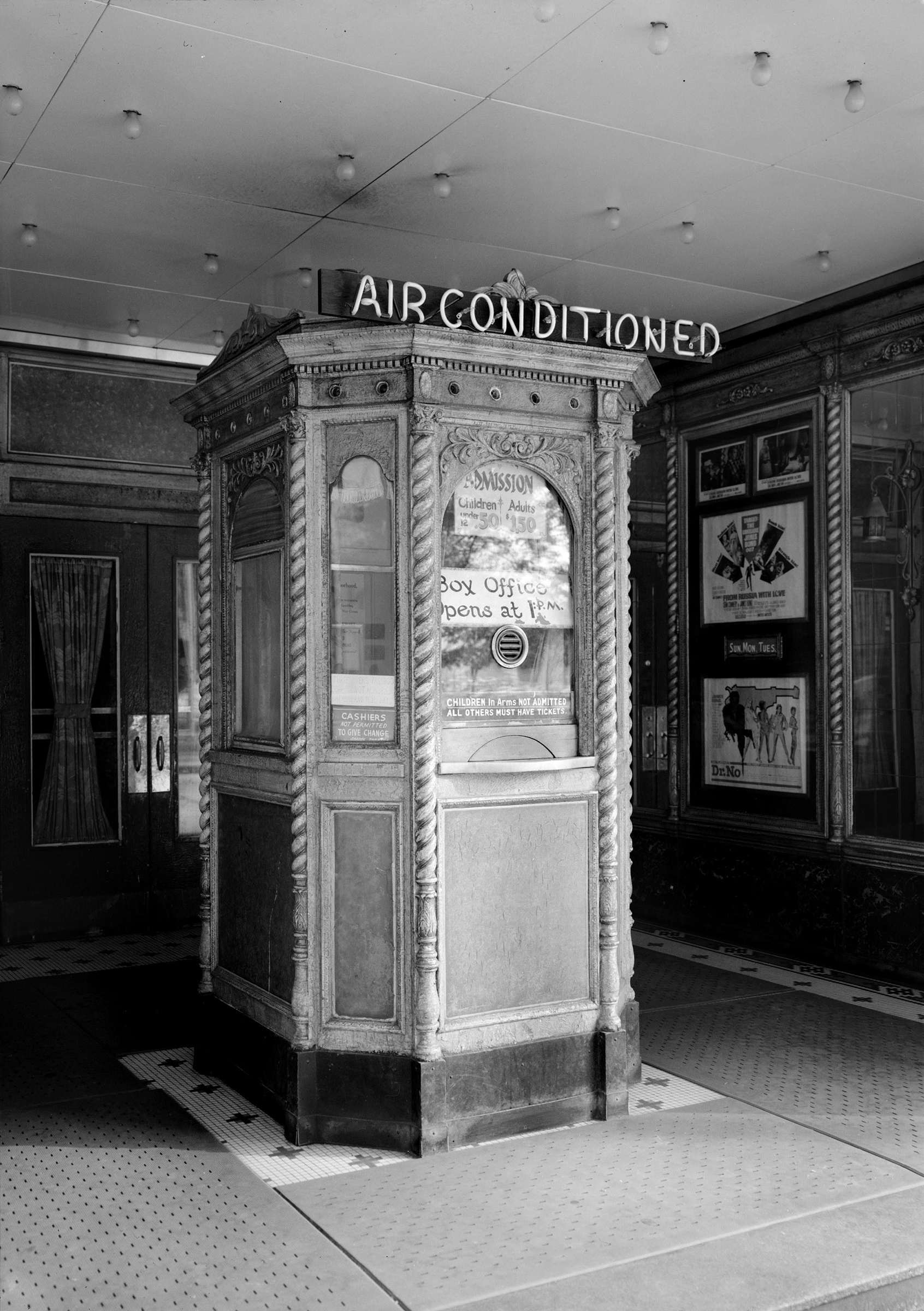 But it came with a price. As it turned out, Freon isn’t exactly non-toxic. Freon is a chlorofluorocarbon (CFC), which depletes the ozone layer and also acts as a global warming gas. By 1974, the industrialized world was churning out CFCs, chemicals that had never appeared on the planet in any significant quantities, at a rate of one million metric tons a year—the equivalent mass of more than 500,000 cars. That was the year atmospheric chemists Sherry Rowland and Mario Molina first hypothesized that the chlorine molecules in CFCs might be destroying ozone in the stratosphere by bonding to free oxygen atoms and disrupting the atmosphere’s delicate chemistry. By then, CFCs were used not only as refrigerants but also as spray can propellants, manufacturing degreasers, and foam-blowing agents.

The ozone layer absorbs the worst of the sun’s ultraviolet radiation. Without stratospheric ozone, life as we know it is impossible. A 1 percent decline in the ozone layer’s thickness results in thousands of new cases of skin cancer. Greater depletion would lead to crop failures, the collapse of oceanic food systems, and, eventually, the destruction of all life on Earth.

In the 1980s, geophysicist Joseph Farman confirmed the Rowland-Molina hypothesis when he detected a near-absence of ozone over Antarctica—the “Ozone Hole.” A fierce battle ensued among industry, scientists, environmentalists, and politicians, but in 1987 the U.S signed the Montreal Protocol on Substances that Deplete the Ozone Layer, which ended Freon production.

The Montreal Protocol remains the world’s only successful international environmental treaty with legally binding emissions targets. Annual conferences to re-assess the goals of the treaty make it a living document, which is revised in light of up-to-date scientific data. For instance, the Montreal Protocol set out only to slow production of CFCs, but, by 1997, industrialized countries had stopped production entirely, far sooner than was thought possible. The world was saved through global cooperation.

The trouble is that the refrigerants replacing CFCs, hydrofluorocarbons (HFCs), turned out to be terrible for the planet, too. While they have an ozone-depleting potential of zero, they are potent greenhouse gases. They absorb infrared radiation from the sun and Earth and block heat that normally escapes into outer space. Carbon dioxide and methane do this too, but HFCs trap heat at rates thousands of times higher. Although the number of refrigerant molecules in the atmosphere is far fewer than those of other greenhouse gases, their destructive force, molecule for molecule, is far greater. 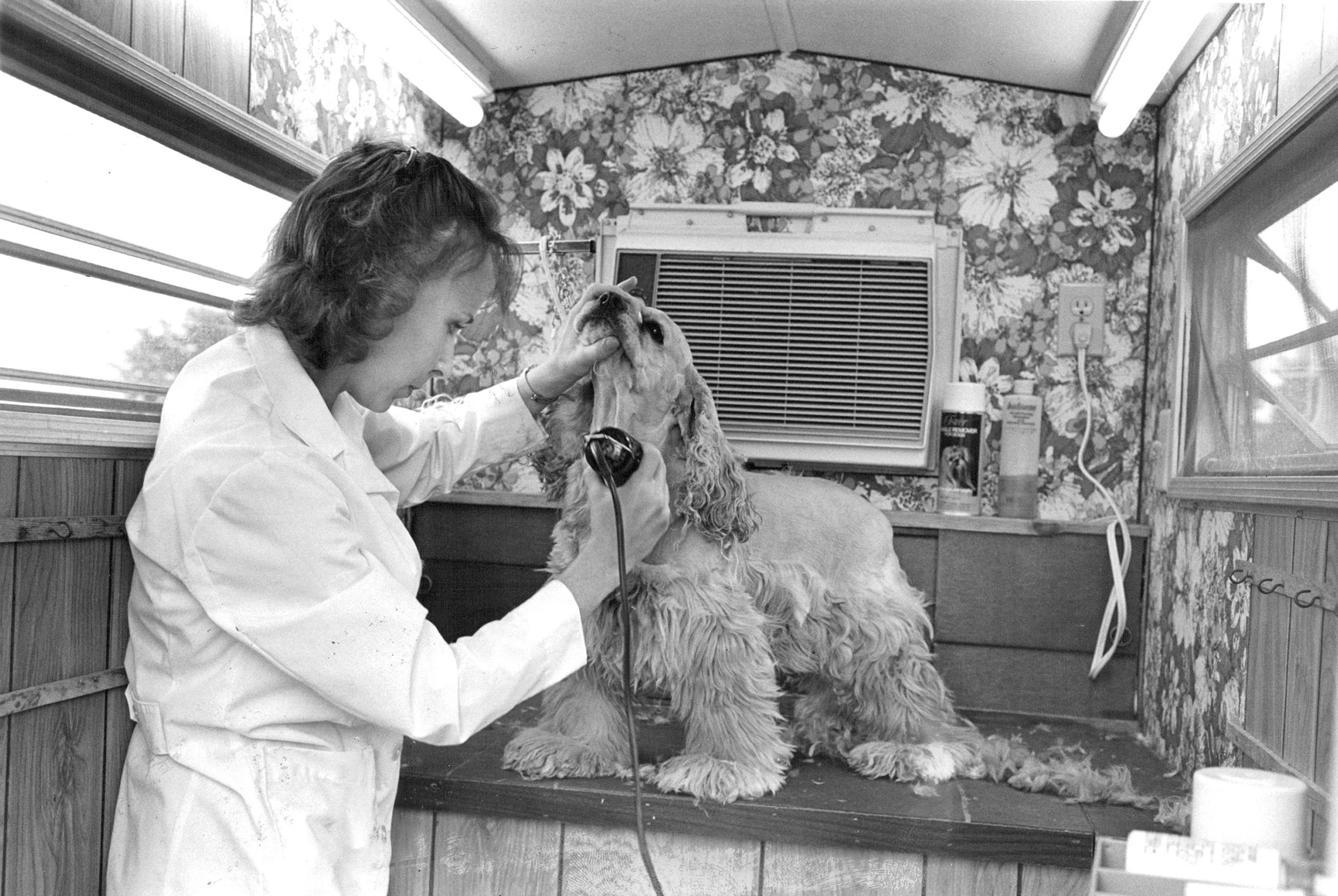 Angela Eaton grooms “Dutchess” inside “House Calls” trailer in 1982. The unit is equipped with a bath, heater, air conditioner and dryer.

In three decades, the production of HFCs grew exponentially. Today, HFCs provide the cooling power to almost any air conditioner in the home, in the office, in the supermarket, or in the car. They cool vaccines, blood for transfusions, and temperature-sensitive medications, as well as the data processors and computer servers that make up the internet—everything from the cloud to blockchains. In 2019, annual global warming emissions from HFCs were the equivalent of 175 million metric tons of carbon dioxide.

In May, the EPA signaled it will begin phasing down HFCs and replacing them with more climate-friendly alternatives. Experts agree that a swift end to HFCs could prevent as much as 0.5ºC of warming over the next century—a third of the way to the goals of the Paris Climate Agreement.

Yet regardless of the refrigerant used, cooling still requires energy. According to the U.S. Energy Information Administration, air-conditioning accounts for nearly a fifth of annual U.S. residential electricity use. This is more energy for cooling overall and per capita than in any other nation. Most Americans consider the cost of energy only in terms of their electricity bills. But it’s also costing us the planet. Joe Biden’s announcement to shift toward a renewable energy infrastructure obscures the uncertainty of whether that infrastructure could meet Americans’ outrageously high energy demand—much of it for cooling that doesn’t save lives. Renewable energy infrastructure can take us only so far. The rest of the work is cultural. From Freon to HFCs, we keep replacing chemical refrigerants without taking a hard look at why we’re cooling in the first place.

Comfort cooling began not as a survival strategy but as a business venture. It still carries all those symbolic meanings, though its currency now works globally, cleaving the world into civilized cooling and barbaric heat. Despite what we assume, as a means of weathering a heat wave, individual air-conditioning is terribly ineffective. It works only for those who can afford it. But even then, their use in urban areas only makes the surrounding micro-climate hotter, sometimes by a factor of 10ºF, actively threatening the lives of those who don’t have access to cooling. (The sociologist Eric Klinenberg has brilliantly studied how, in a 1995 Chicago heat wave, about twice as many people died than in a comparable heat wave forty years earlier due to the city’s neglect of certain neighborhoods and social infrastructure.) Ironically, research suggests that exposure to constant air-conditioning can prevent our bodies from acclimatizing to hot weather, so those who subject themselves to “thermal monotony” are, in the end, making themselves more vulnerable to heat-related illness. 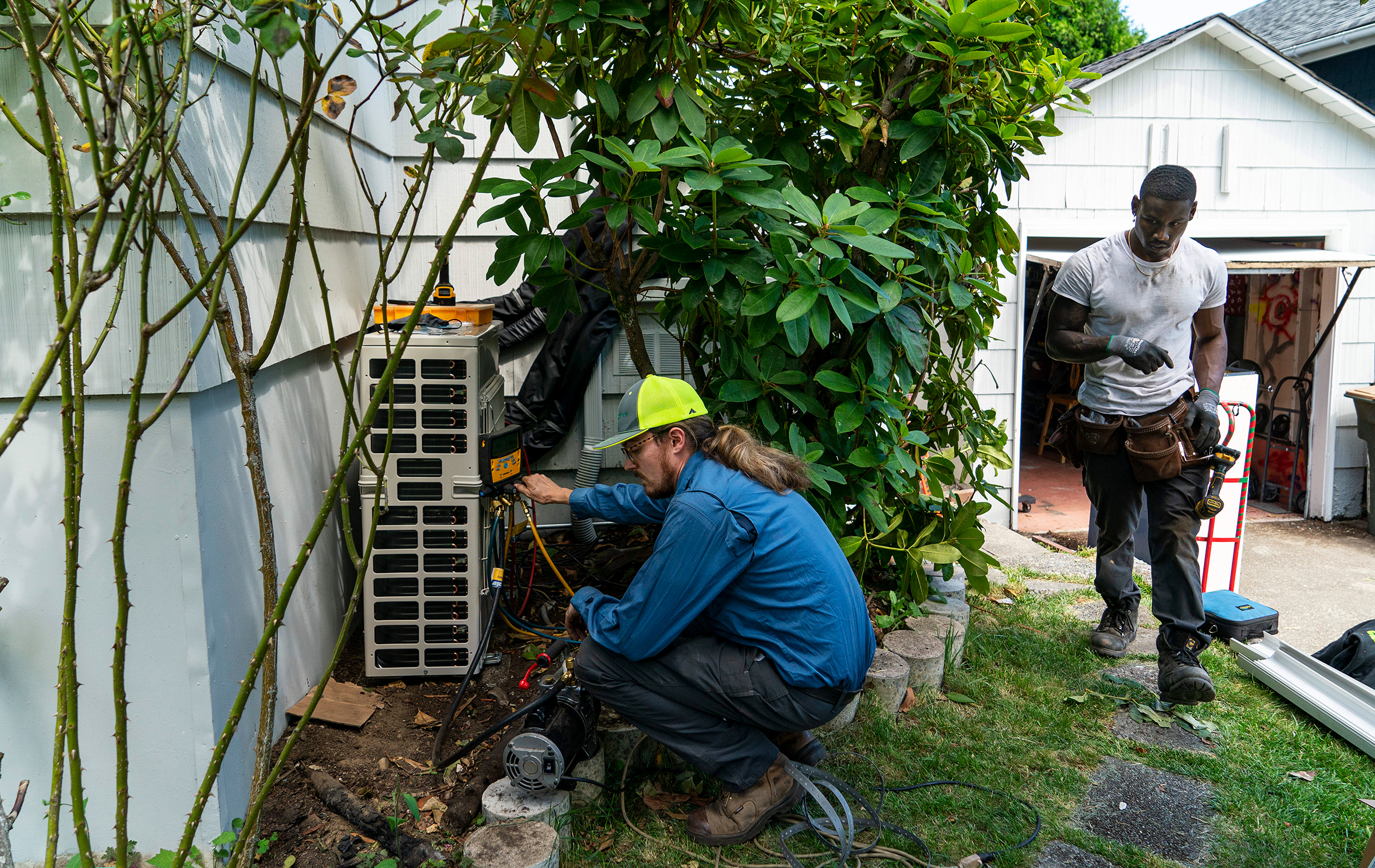 Luke Peters, left, and Elliott Thomas install a mini-split heating and air conditioning system at a home in Seattle on June 23, 2021. A heat wave soon set records across the region.

And, of course, air-conditioning only works when you have the electricity to power it. During heatwaves, when air-conditioning is needed most, blackouts are frequent. On Sunday, with afternoon temperatures reaching 112ºF around Portland, the power grid failed for more than 6,300 residences under control by Portland General Electrics.

The troubled history of air-conditioning suggests not that we chuck it entirely but that we focus on public cooling, on public comfort, rather than individual cooling, on individual comfort. Ensuring that the most vulnerable among the planet’s human inhabitants can keep cool through better access to public cooling centers, shade-giving trees, safe green spaces, water infrastructure to cool, and smart design will not only enrich our cities overall, it will lower the temperature for everyone. It’s far more efficient this way.

To do so, we’ll have to re-orient ourselves to the meaning of air-conditioning. And to comfort. Privatized air-conditioning survived the ozone crisis, but its power to separate—by class, by race, by nation, by ability—has survived, too. Comfort for some comes at the expense of the life on this planet.

It’s time we become more comfortable with discomfort. Our survival may depend on it.

Get our climate newsletter. Learn how the week’s major news story connects back to the climate crisis.

For your security, we’ve sent a confirmation email to the address you entered. Click the link to confirm your subscription and begin receiving our newsletters. If you don’t get the confirmation within 10 minutes, please check your spam folder.