After months of waiting, the Minecraft 1.17 update was officially released on June 8th, 2021. It is the first part of Caves and Cliffs update, which Mojang announced at the Minecon 2020 Live Event.

Minecraft 1.17 Caves and Cliffs update introduces over 100 new blocks and items. With so many unique colors and textures, players are confused about what to use for building. Since many players would create a new world for 1.17, they would want to implement new blocks in their builds.

The roof is an essential part of almost all bases. This article showcases some beautiful roof designs and ideas for the Minecraft 1.17 update.

What are the best house roof ideas for Minecraft 1.17 Caves & Cliffs update?

Using copper’s oxidizing property, players can create roofs that change their color as time passes by. The oxidized copper has a bright green texture. Players can use them along with dark blocks such as dark oak, deepslate, and blackstone to create beautiful roofs in Minecraft.

Amethyst geodes are the new rare underground structure added in Caves and Cliffs Part 1. In these structures, players can find beautiful amethyst blocks and shards. Their bright purple texture is eye-catching and looks magical.

Along with amethyst blocks, players can also add some purple-colored blocks like purpur to add a gradient to the roof’s design. Adding amethyst clusters is another way to make it look more magical as they produce a faint light of level four. 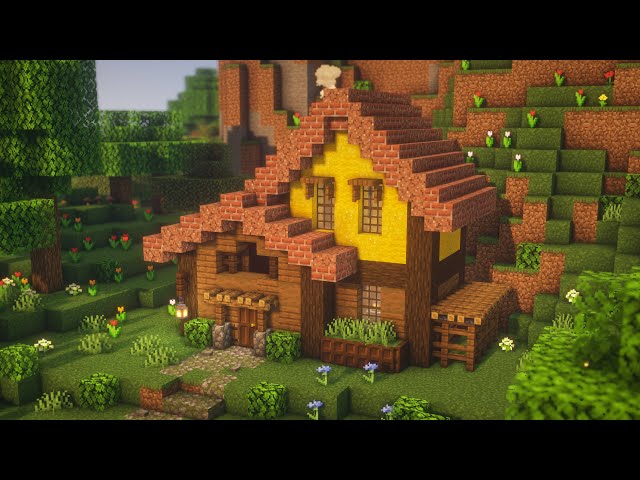 Often underestimated, brick is a brilliant block for building in Minecraft. Bricks have a beautiful red brick texture similar to the real-life bricks used to create houses.

Players can obtain bricks by trading with masons. They can also smelt clay balls to make bricks and use four bricks to make a brick block.

Prismarine is easily one of the most beautiful blocks in Minecraft. For a long time, players had no other blocks with similar color as prismarine. And in the nether update, Mojang added warped plank, a new type of wood.

Using prismarine and warped planks, players can create beautiful roofs in Minecraft. They can also try to add oxidized copper blocks to add some more variety to their roofs.

Deepslate is a new overworld block found near the bedrock layer. These blocks look similar to blackstone but have a gray tone and are easy to get. Deepslate is available in different types like cobbled, bricks, chiseled, and more.

Due to their dark gray texture, players can use lighter color blocks or blend them with blackstone blocks to create beautiful roofs.

Disclaimer: This article is subjective and solely reflects the opinion of the writer.